Researchers at Washington University in St. Louis’ School of Medicine and Sleep Medicine Center have found an interesting trend in what they call a “marker” for Alzheimer’s Disease.

According to the study, the level of amyloid beta, the protein chain primarily responsible for the development of Alzheimer’s, fluctuates throughout the day. What’s particularly interesting about this new finding is that the fluctuation echoes the sleep-wake cycle.

Alzheimer’s Disease (AD) occurs when tangles of amyloid beta protein form plaques in the brain. These plaques form in existing tissue, and, depending on how advanced the disease is, disrupt functions of the brain and nervous tissue. This causes memory loss and other phenomena that we recognize as being symptomatic of AD. 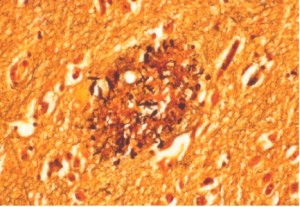 While the trend had been previously observed in mouse models, this was the first study to observe it in human beings. Three different groups of people–people who had been diagnosed with amyloid plaques, people in the risk age group (over 60 years) with no plaques, and a younger, healthy group (mean age 35) that was not at immediate risk of developing plaques–were given lumbar punctures to extract cerebrospinal fluid and check for amyloid beta levels. The fluid was extracted every hour for 36 hours, and during this time period, the researchers also video recorded the subjects to look for possible connections between behavior and what the fluid levels reflected.

In regards to the link between sleep and amyloid beta levels, the researchers found that there was a 6 hour lag when compared to the sleep pattern. For instance, if the peak hour of sleep was at 4AM, then the lowest levels of amyloid beta were found to be at 10AM. Similarly, if peak hour of wakefulness was at 4PM, then highest levels of amyloid beta were at 10PM. They also found that this distinct peak-and-crest model was primarily in the healthy and non-plaque risk group. The model in the group with diagnosed plaques was relatively flat.

“As you age, your sleep is disrupted,” said Rachel Potter, research technician and one of the authors of the study, “and so what our study shows is that with people who are older, the more their sleep is disrupted, or the less sleep they get, the less their amyloid beta levels fluctuate.” And this likely means that there is more of a chance that the protein aggregates and forms plaques.

When asked if this meant that being deprived of sleep was an indication that you might be at risk for getting Alzheimer’s, Potter said that it was too soon to jump to conclusions. “For now, it’s just important to know that amyloid beta follows this pattern of fluctuation. Future studies will determine how important this pattern actually is.”